On the 14th of December, 2011, a dog named Kabang risked her life to save her humans, Rody Bunggal; his daughter, Christina; and his niece, Princess. The young girls were crossing the street somewhere in Zamboanga City, Philippines, when a motorcycle almost ran them over. Kabang leaped towards the motorcycle’s path to keep it from happening.

All three of them were happy to see her alive after the accident. What made them worry, however, was the fact that her snout could no longer function properly. Fortunately, they met a kindhearted veterinarian named Dr. Anton Lim. He exerted all efforts to help the couple save Kabang’s life. 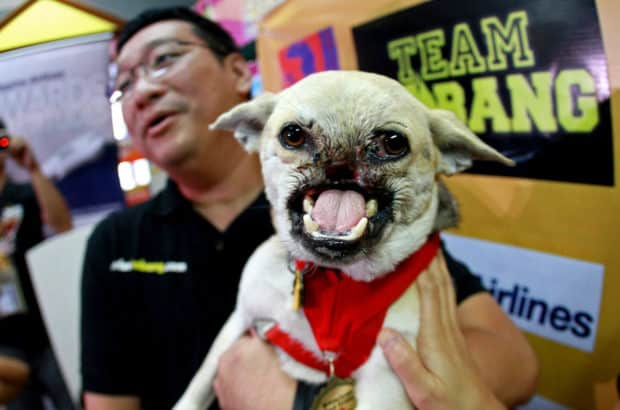 Seeing how determined the dog was to fight for her life made Dr. Lim want to have a stature built for her. The reason behind it being, he wanted to honor her for courageously staring death in the eye to save her humans. The move made her lose a part of her body, but he could see that what mattered more to her was seeing her family alive.

When Dr. Lim pitched the idea, a lot of parties expressed their interest to be part of it. He also reached out to Mindanao artist Kublai Milan and commissioned him to craft a 1.2-meter statue in honor of Kabang.

He wants everyone to remember the unconditional love that Kabang has for her humans. He hopes that it would also encourage everyone to lend their voices to poor dogs that continue to experience animal cruelty.

Sad Dog That Was Abandoned By His Family Completely Transformed After...

It's always sad when we hear news about dogs being abandoned by their families. Usually, it's the sick and elderly dogs that are surrendered...

Puppy That Was Kept Locked In A Birdcage Gets Rescued And...

This Boy Finally Got Reunited With His Lost Dog, And It...

This Dog That Kept Running Away From Her Owner Was Found...