The Nobel Prize is one of the prestigious awards that an individual can receive. Since its inception in 1901, the Nobel Prize has been awarded to 930 individuals and 25 organizations to date. It is part of Alfred Nobel’s will to reward people who have contributed most to humankind. The Nobel Prize has six categories: Physics, Chemistry, Medicine, Peace, Literature, and Economics.

The recipients of this highly acclaimed award in 2020 have included a four-legged team member. It is the very first time in history that a dog wins in the Peace category.

Foxtrot, a rescue dog, is a part of the World Food Programme (WFP). WFP aims to fight hunger and starvation in the whole world. While there are more significant people working in the WFP, Foxtrot is the one gaining the most recognition than the rest of the team.

The WFP team found Foxtrot as a stray when he was four weeks old during their beach clean-up drive in Cox’s Bazar, Bangladesh. The team didn’t know what to do with him because they were not dog lovers. They even tried to shoo him away, but he persisted to win them with his charm. Later on, they decided to take him with them for a night.

Foxtrot’s one-night stay with the WFP team became a permanent one. The team made Foxtrot the face of the program.

Foxtrot’s role is to comfort the whole WFP team and those who need his presence during their missions. Foxtrot is considered as the mascot as his cute face encourages everyone to support the organization. He usually wears a cape with the WFP logo on it when they are going to different places. 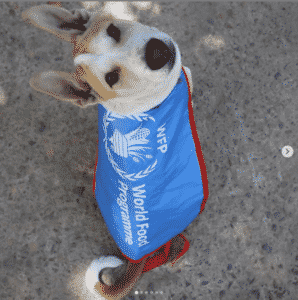 Indeed, Foxtrot is effective in spreading the word about WFP’s cause! 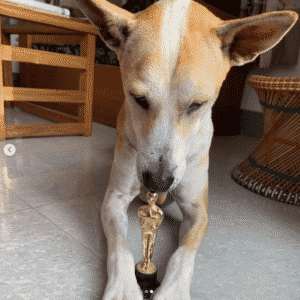 The World Food Programme will continue its mission to fight hunger.

Thank you, Nobel Prize, for recognizing the efforts of WFP!

Neglected Dog Completely Shuts Down After Getting Rescued, Relearns How To Be Happy

Neglected Dog Completely Shuts Down After Getting Rescued, Relearns How To...

When Stewart was found in the woods of rural Georgia, he had a heavy chain attached to his collar, and the other end was...

A Cute Blind Puppy Captured The Heart Of Each Member Of...

After Missing For A Decade Senior Dog Still Recognizes Owners In...